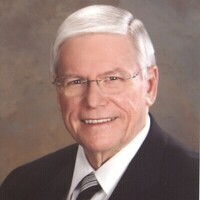 Order Flowers
for the Family

George was born on December 16, 1941, in Harrison, AR the son of the late Jay Raymond Coffman and Bertha (Dobbs) Coffman.

George was a graduate of Harrison High School and attended the University of Arkansas at Fayetteville.

George was an avid Razorback fan and for years he attended both basketball and football games.

George was a member of First Baptist Church of Benton for over 20 years.

In 1973, George’s friends set him up on a blind date with his future wife Janice (Harber) Coffman.  He quickly fell in love with her and her 6 year old son Chris Melton.  They were married on December 21, 1973, and lived in Fayetteville until 1979 when they moved to Benton, AR.  Shortly before moving to Benton, they had a son, Jonathan Coffman.

The family would like to thank Kindred Hospice and all medical staff that have cared for George during the last three years.

Visitation will be held at noon on March 8th, 2021 at Ashby Funeral Home of Benton, AR with Funeral Services beginning at 1pm.  Burial at Pinecrest Cemetery will directly follow the service.  Dr. Rick Grant will be officiating the service.

In lieu of flowers please place donations to the Special Olympics or the McDonald House.