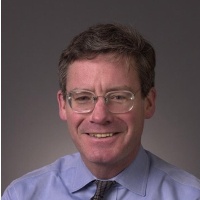 David Sawyier passed away at age 68 on June 10, 2019. Beloved husband of Peggy (Barton) for forty years; dear father of their two children, Timothy and Anne; son of the late Calvin Sawyier and the late Fay Horton; brother of Terry Straus, Michael, and Stephen. Mr. Sawyier was a partner at the Chicago law firm Sidley Austin for over 34 years.

A graduate of St. Mark's School (Southborough, MA), Harvard College, Christ Church Oxford, and Harvard Law School, Mr. Sawyier clerked for Judge George MacKinnon on the U.S. Court of Appeals in Washington, D.C. before joining Sidley; there, he founded the firm's private investment funds practice in the late 1980's, and subsequently expanded it to both coasts and later to Europe and Asia.  In 2013 he was named Best Lawyer's Private Funds/Hedge Funds "Lawyer of the Year" (Chicago).

Mr. Sawyier was captain of both the Harvard and Oxford crews, and represented the United States in the 1971 World Championships in Copenhagen and the 1972 Olympic Games in Munich.  A devoted supporter of the musical, athletic, and academic endeavors and achievements of both of his children, David also served as a model and mentor of client care at Sidley.

A memorial service will be held at the Fourth Presbyterian Church, located at North Michigan Avenue at Delaware Place, Chicago, IL 60611 at 11 a.m. on Tuesday, June 18. Donations may be made to the Kidney Cancer Association, www.kidneycancer.org.